October is over, which means one more Halloween has come and gone for this costume-loving DIYer. In an effort to avoid overthinking, I decided to dress up as the first thing that really spoke to me: the villainous Captain Hook.

“Which Hook?” you ask? As in, the larger-than-life, murderous pirate from Disney’s Peter Pan, or the delightful Dustin Hoffman in Hook, one of my favorite childhood films? The answer is… 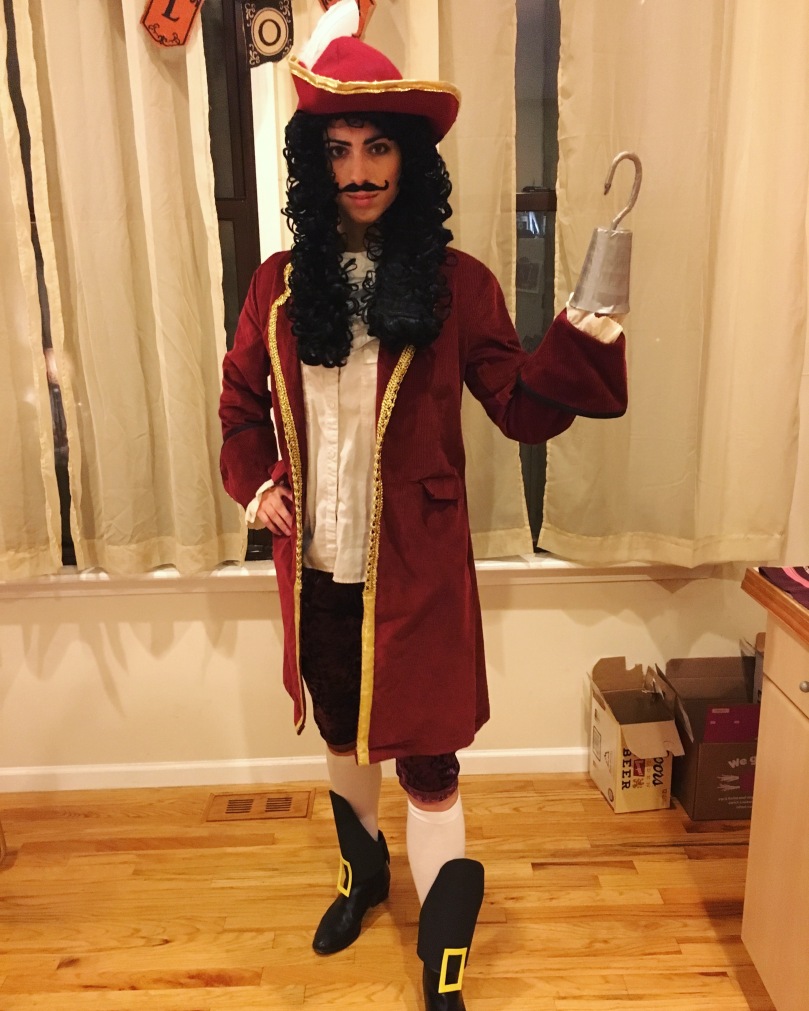 …a little bit of both, I think! Here’s how I put my version of Captain Hook together: 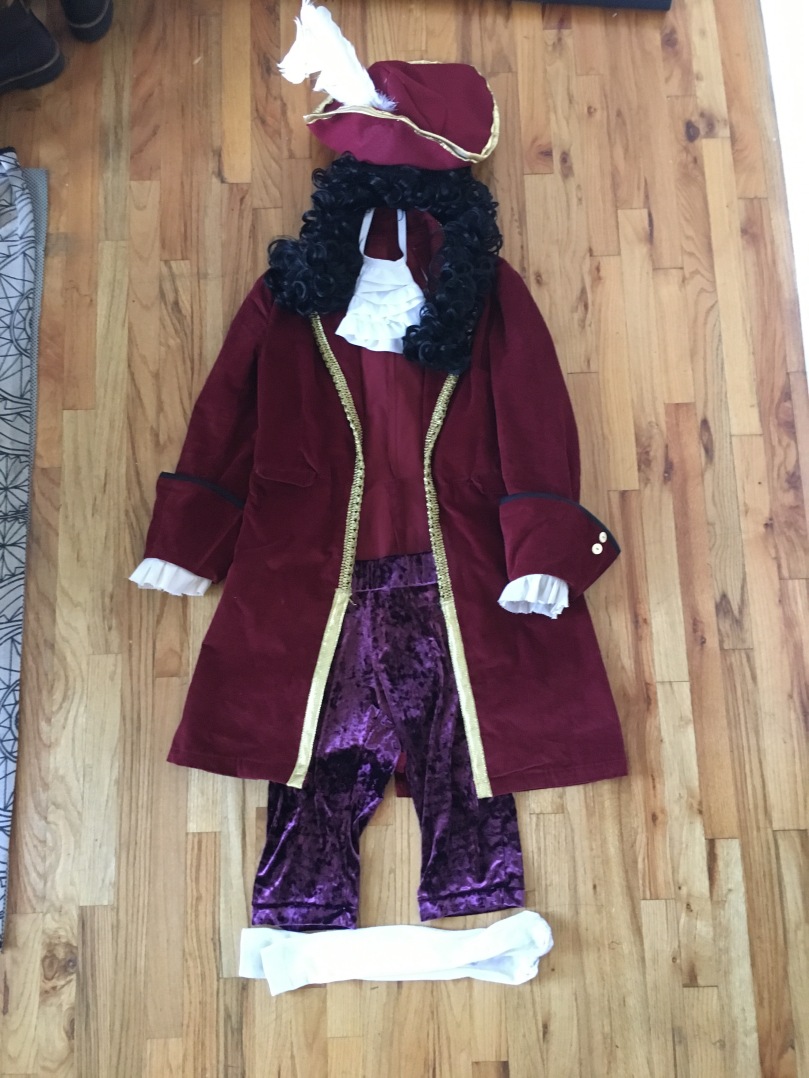 The Anatomy of a DIY Captain Hook Costume, from Head to Toe 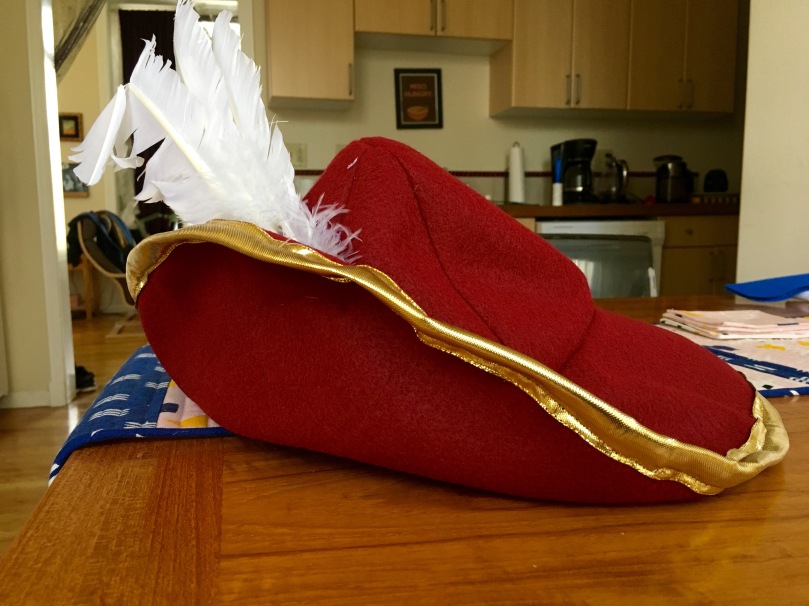 I’ve made hats from scratch before, and it ain’t fun for me. This time around, I wanted to start with a pattern as a guide, and Pinterest delivered with this free sunhat pattern. After some printing frustration, I ended up freehanding a copy, drafting a slightly asymmetrical brim.

I doubled up on the felt for the brim, sandwiching some medium-weight interfacing in between. The edges are finished with some cheap gold wire-edged ribbon, which added additional structure. To attach the feathers and keep the right side of the brim folded up, I used duct tape and a few hand tacks.

The Wig and Moustache

I bought the wig on Amazon for about $15. It is SUPER curly and relatively comfortable, though somewhat hot. Would buy again!

As for the moustache, I can’t complain too much since it came in a pack of 36 stick-on moustaches that cost under $10 total, but it was itchy and kept coming un-stuck whenever I laughed. I actually ended up drawing on an eyeliner moustache at the end of the night after sweating through two stick-ons. #UpperLipSweat 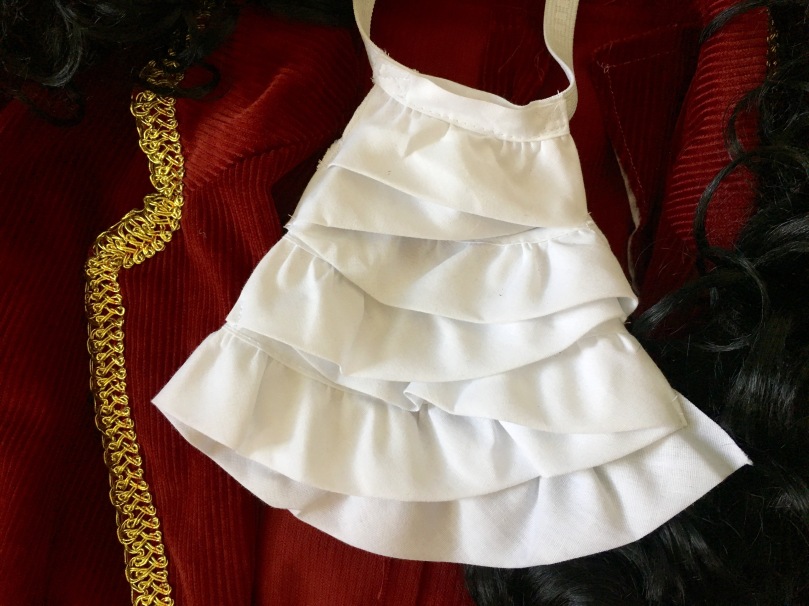 While I could have made the cravat with a couple of pieces of white fabric or muslin, I went the super easy route after finding some ruffled white trim at JoAnn. I folded and pinned it as I saw fit, and sewed it together with a few machine stitches at each edge. I attached a strap of elastic to either end to make a cravat necklace, which I wore over an old white Levi’s shirt.

Does this red coat look familiar? It’s the ghost of a previous Halloween costume: my red Willy Wonka coat from 2014, which I made using McCall’s M7003 men’s pattern.

At first, I was convinced I needed to make a brand-spanking new, cherry red, flared coat à la animated Hook: 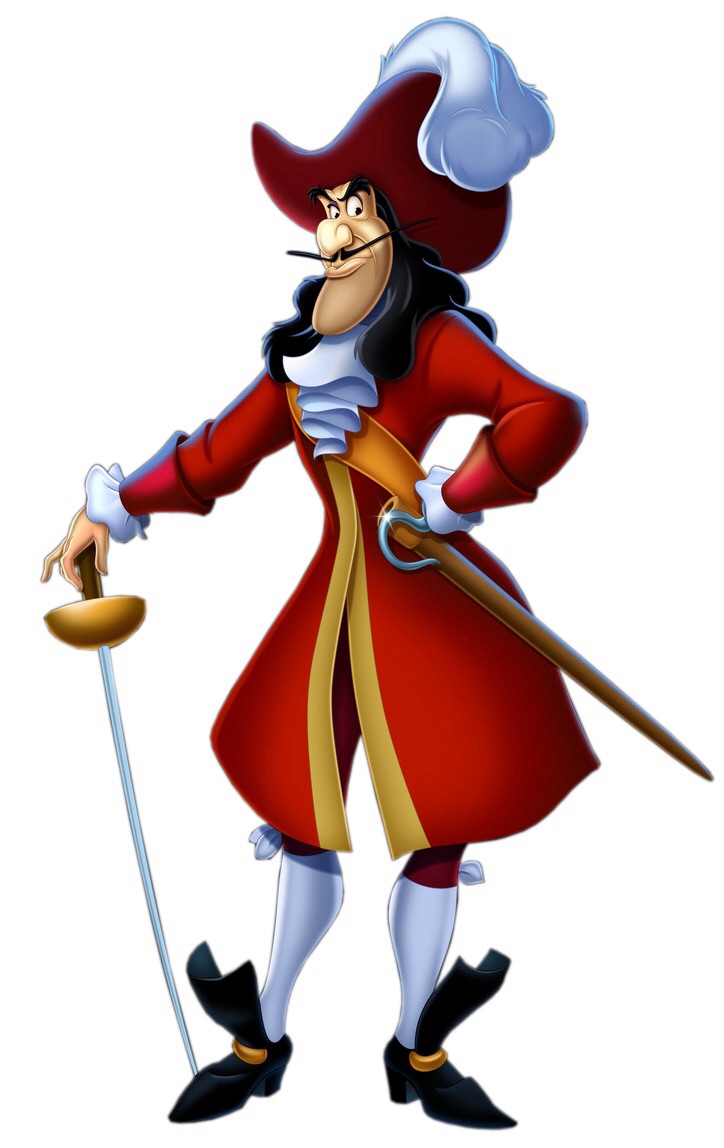 Then, I realized I was being EFFING CRAZY and decided to add some flair to an old costume I would probably never wear again. Here’s how I altered the coat: 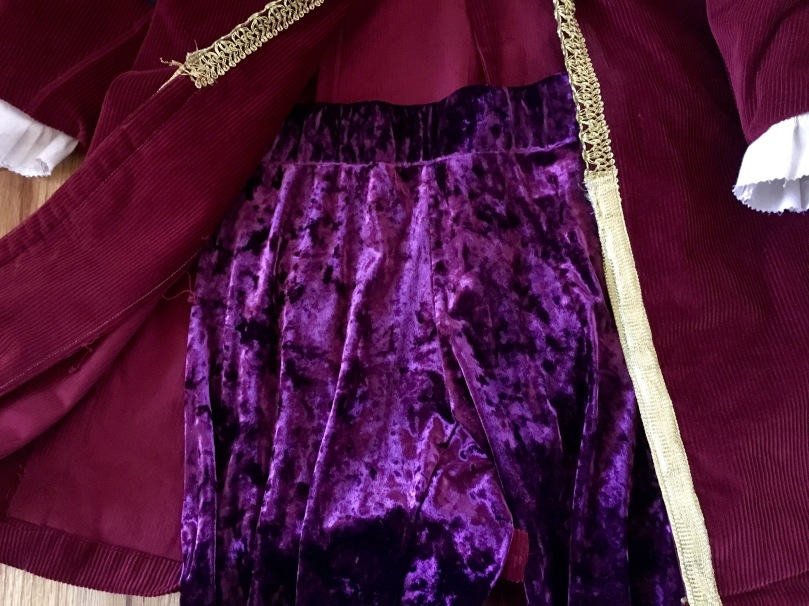 “Why wear leggings when you can make your own breeches!” says the dummy. I kid… kind of.

Since I’d made Hudson pants many times before, I decided to make my own Hook breeches with some berry-colored stretch velour. They turned out fine, except that I somehow managed to cut the calf bands the wrong width and had to cut them off and try again. The outcome left me with shorter breeches than I wanted, but… I honestly didn’t care too much. Halloween costumes need not be perfect!

The Socks and Shoes

I bought some white knee-high socks from Target. Ta-da! For the shoes, I wore my black chelsea-style boots and cut some black foam to fashion oversized tongues, which I fastened with duct tape and wore over each boot. I also cut buckles with yellow foam and glued those onto the tongues, but they fell off within the first hour of the party. 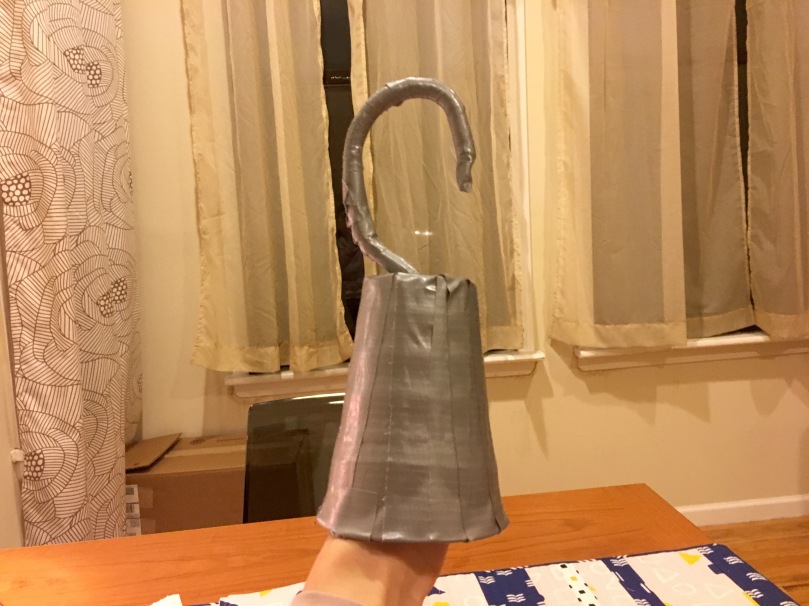 You can’t have a Captain James Hook costume without… a hook. Luckily, this cost about $2 total. I found a cheap ceiling mount hook from Home Depot and covered it in duct tape. I then covered a Solo cup in narrow strips of duct tape and screwed the ceiling hook to the bottom.

At this point, you might be wondering if anyone went as Peter Pan. Since my fiancé, Marc, had already dressed up as Peter (albeit seven years ago), he didn’t want to repeat. I begged him to go as Smee, to which he responded, “That is literally the exact opposite of my body type.” True. Very true.

Since I couldn’t have my Smee, the idea of having another captain—or should I say cap’n—in the house won out. 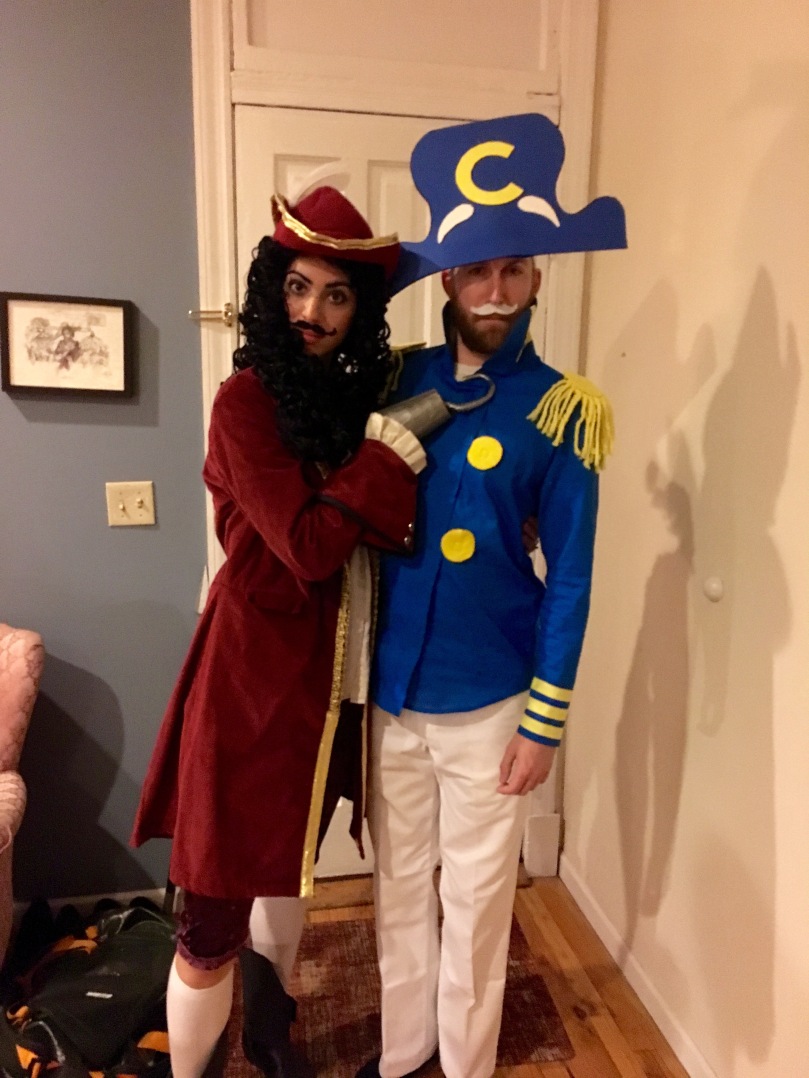 The Anatomy of a Cap’n Crunch Costume, from Head to Toe 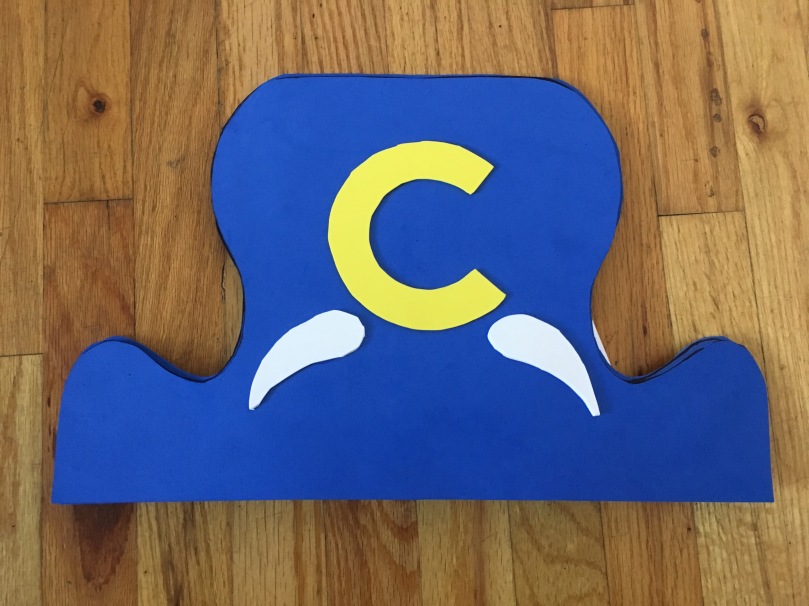 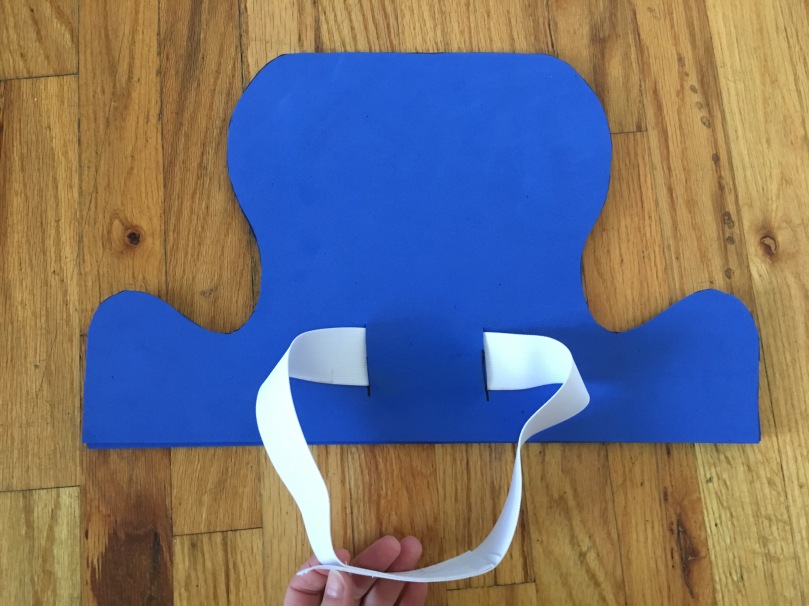 Marc made the hat, woot! He free-handed a pattern and then cut two layers of blue foam. He fed some thick elastic through two slits he made in one layer of the foam, and I sewed the elastic into a circle to create a headband. He then glued the two blue pieces together before finishing up with a big, bold yellow “C” and those ridiculous white eyebrows. 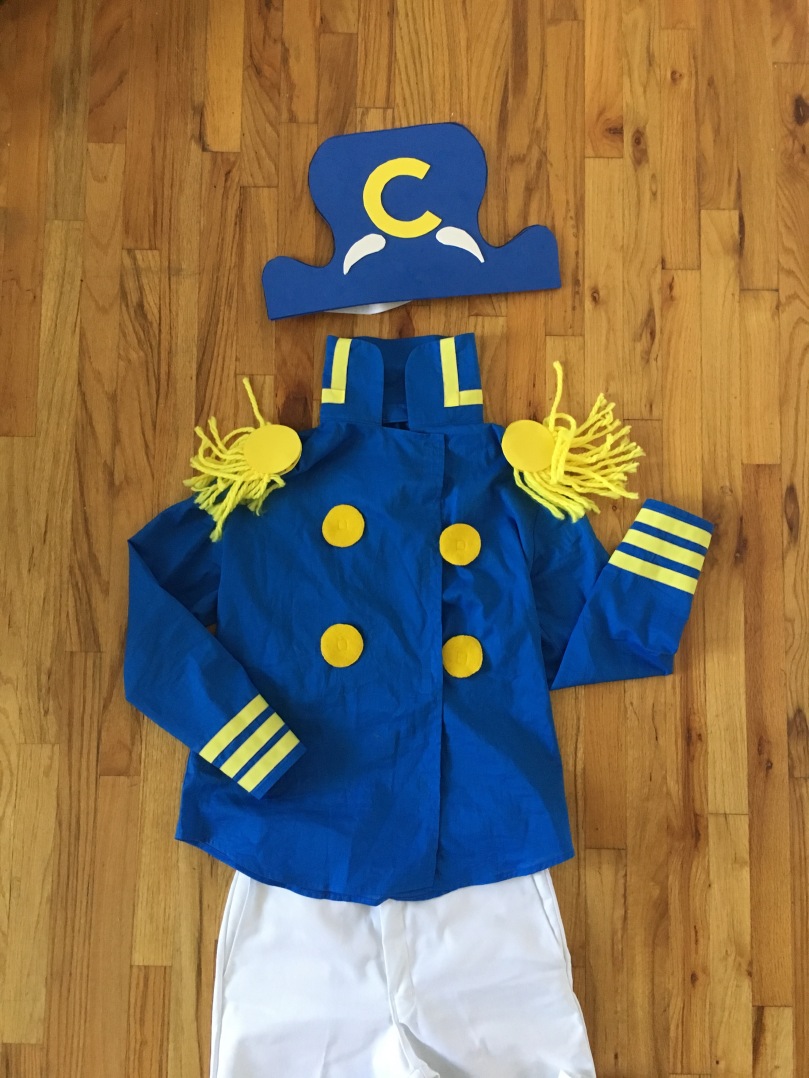 This DIY costume from the Domestic Heart served as great inspiration for Cap’n Crunch’s jacket. I used the trusty McCall’s 6044 men’s shirt pattern as a base, making the following alterations:

I used a simple blue quilting cotton for the body. Marc created the epaulettes with yellow foam and yarn and duct-taped them to the shoulders.

The best part about wearing roughly the same size pants and shirt as your significant other? You can get more mileage out of both costumes!

And now for a few more gratuitous Halloween photos:

Happy post-Halloween! May you all find something equally pointless to care deeply about.

Did you DIY your costume this year?

We love a fall palette. 🍂 Couldn’t resist some selfies in our matching outfits. Happy, serious, smizing… what do y’all prefer? 😂 I’m in a @sewhouse7 Toaster Sweater and Evie is in an adorable mustard onesie from Nana @amysloboda ! #girlmom #isew #toastersweater
Beautiful place, beautiful wedding, beautiful friends. 👰🏻 🤵🏼 🎉 Congrats Abe and Liz! P.S. This weekend in The Northwoods was made possible by Yaya Polly. 🤗 P.P.S. This is a @truebias Nikko Dress and a handwoven shawl by @amysloboda !
Nothing like a deadline to get me sewing again! Made this Mathilde Wrap Dress by @untitledthoughts for my friends’ Nick and Rachel’s wedding and literally finished hemming it about 5 hours before the ceremony. 😁 I wanted a knock off Diane Von Furstenberg look and I’m super pleased with how it turned out! Fabric is from @joann_stores — I am surprisingly bad at taking photos of anything other than my baby nowadays so these are the best I’ve got for now! Had a little baby-parent meetup before the wedding, which was obviously adorable. 👶🏻👶🏼👶🏻
Baby Evie is here! Eve “Evie” Frances Sloboda was born at 12:14 a.m. on June 17, 2021, at 5 lb. 9 oz. and 19” long. I was diagnosed with preeclampsia and needed to deliver sooner than planned at 36 weeks on the dot. We’ve been home from the hospital for almost a week now and our little peanut is doing great! We love her dearly and Cora does, too. 😊 ❤️ 👨‍👩‍👧 🐕