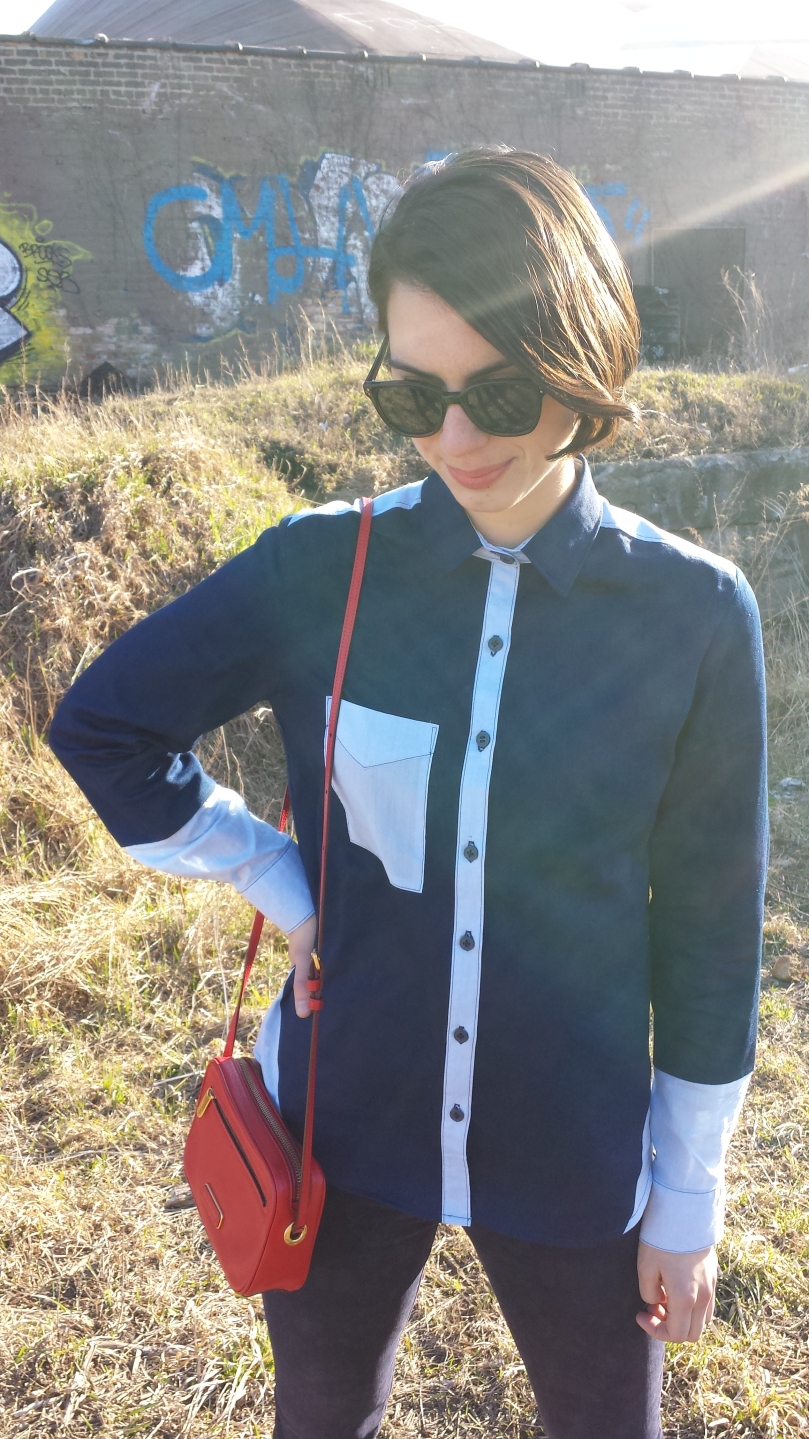 When it ain’t broke, why not color block it?!

When it ain’t broke, why not accidentally make a bowling shirt?!

Yes, I think this kind of resembles a bowling shirt. Or something that Zack would wear to seduce Kelly in Saved by the Bell. I did grow up in the ’90s after all. 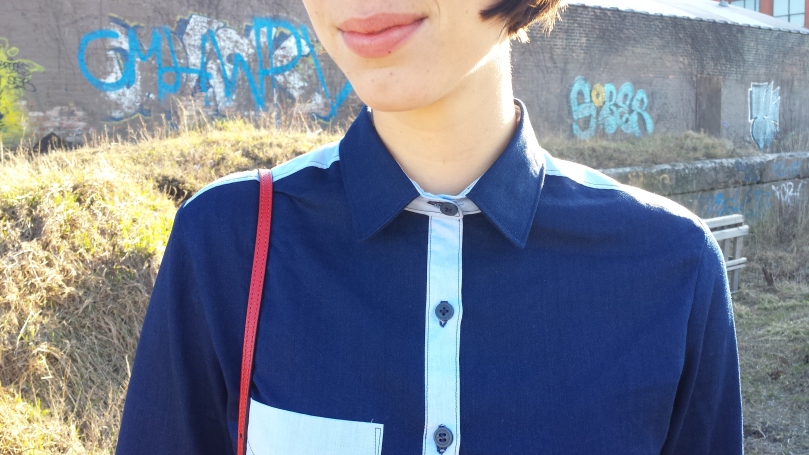 Inspired by Grainline Studio’s post about color blocking, I sewed this Archer Button Up with some aptly named light blue and deep blue shirting from Denver Fabrics. It’s my third Archer, and I’m officially declaring this a tried-and-true pattern. I love the boyfriend fit and even the butt ruffle on view B, although this time I opted again for the classic view A, as I was already adding some interest with the kooky color blocking. (Check out that second link for my sizing and modifications.) 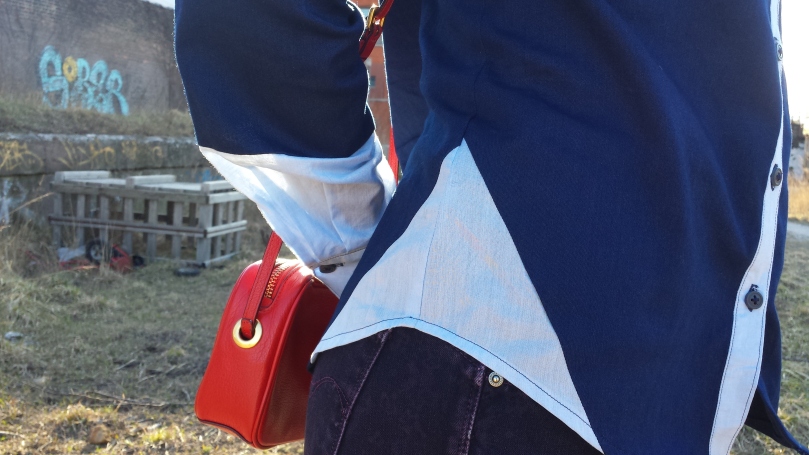 The side angles don’t match up perfectly, but I didn’t care enough to re-cut the pieces. I’d originally planned to do the whole sleeve in deep blue but ran out of fabric, hence the sleeves that look like they’ve been dip-dyed in bleach. I like ’em. 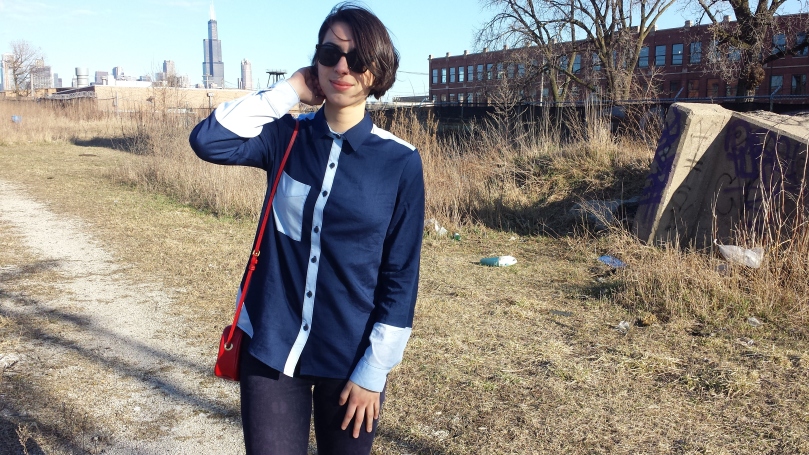 I finished all the seams with my new serger, which is like a child—one minute it’s acting like an angel and the next it’s throwing a damn hissy fit. I think we just need some more time to bond. I don’t understand its moods or what it likes to eat—yet. (If you’re wondering, I’m having the same problem as the person in this thread, entitled “I’m going to throw my serger out the window.” There are some good tips in there that I haven’t had the time or patience to try yet. I’ll report back on our relationship soon.) 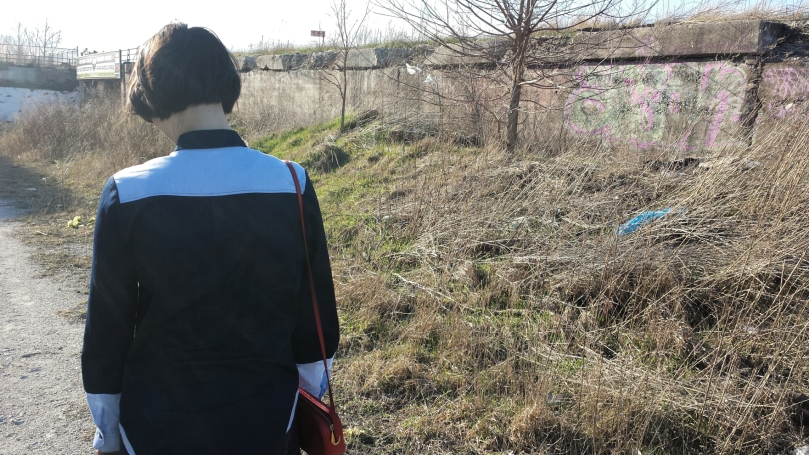 Anywho, the light blue is much lighter weight than the dark blue, so I pressed those seam allowances toward the darker fabric so they wouldn’t show through (a little tip from Grainline’s tutorial). 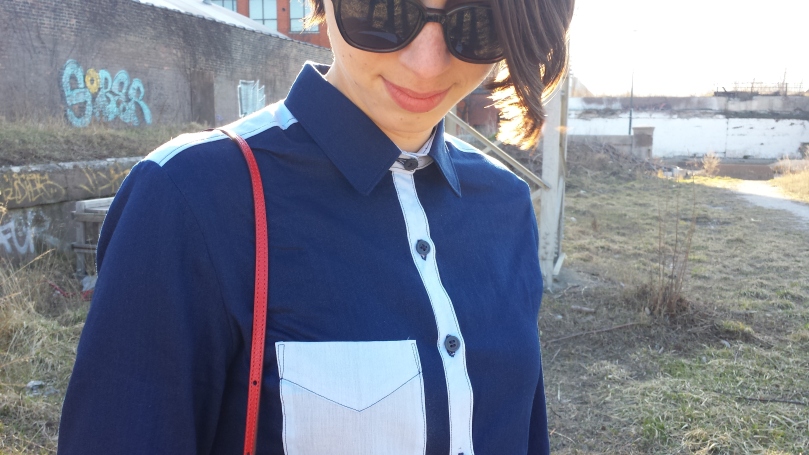 The only thing I might go back and amend is the pocket. I like having just one instead of two (made using the alternate Archer pocket tutorial because I lurrrrve it). I texted a grainy picture of this shirt to my mom the night I made it and she suggested adding some sort of patch/crest to the pocket.

UPDATE: I just googled my last name and apparently we are all Gryffindors?!?! Obviously I am going to find a family crest patch and iron/sew that on. Problem solved.

Do you ever sew extras/accoutrements onto your stuff?

5 thoughts on “Another Archer Button Up”

We love a fall palette. 🍂 Couldn’t resist some selfies in our matching outfits. Happy, serious, smizing… what do y’all prefer? 😂 I’m in a @sewhouse7 Toaster Sweater and Evie is in an adorable mustard onesie from Nana @amysloboda ! #girlmom #isew #toastersweater
Beautiful place, beautiful wedding, beautiful friends. 👰🏻 🤵🏼 🎉 Congrats Abe and Liz! P.S. This weekend in The Northwoods was made possible by Yaya Polly. 🤗 P.P.S. This is a @truebias Nikko Dress and a handwoven shawl by @amysloboda !
Nothing like a deadline to get me sewing again! Made this Mathilde Wrap Dress by @untitledthoughts for my friends’ Nick and Rachel’s wedding and literally finished hemming it about 5 hours before the ceremony. 😁 I wanted a knock off Diane Von Furstenberg look and I’m super pleased with how it turned out! Fabric is from @joann_stores — I am surprisingly bad at taking photos of anything other than my baby nowadays so these are the best I’ve got for now! Had a little baby-parent meetup before the wedding, which was obviously adorable. 👶🏻👶🏼👶🏻
Baby Evie is here! Eve “Evie” Frances Sloboda was born at 12:14 a.m. on June 17, 2021, at 5 lb. 9 oz. and 19” long. I was diagnosed with preeclampsia and needed to deliver sooner than planned at 36 weeks on the dot. We’ve been home from the hospital for almost a week now and our little peanut is doing great! We love her dearly and Cora does, too. 😊 ❤️ 👨‍👩‍👧 🐕